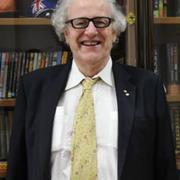 Are you Colin Mackerras?

Professor Colin Mackerras 马克林 (Officer in the Order of Australia, Fellow of the Academy of the Humanities of Australia) is a specialist on Chinese history, musical theatre and ethnic minorities, as well as Australia-China relations and Western images of China, and has published widely on all those subjects. He has written or edited over 40 books and authored nearly 200 scholarly papers about China. Born in Sydney, Australia, in 1939, he has visited China nearly 70 times. He worked at Griffith University from 1974 to 2004 and has been a professor Emeritus at the University since retirement. He taught first at the Beijing Foreign Studies University from 1964 to 1966 and has taught there many times since. He has also taught several times at the Renmin University of China in Beijing. He won a Friendship Award 友谊奖 from the Chinese government in 2014 and in 2016 a Special China Book Award中华图书特殊贡献奖, given to foreigners who have made outstanding contributions in spreading Chinese culture through their writings. His most important books include The Rise of the Peking Opera, 1770–1870 (Clarendon Press, Oxford, 1972); Chinese Drama, A Historical Survey (New World Press, Beijing, 1990); China’s Minorities: Integration and Modernization in the Twentieth Century (Oxford University Press, Hong Kong, 1994); Western Images of China, Revised Edition (Oxford University Press, Hong Kong, 1999); China’s Ethnic Minorities and Globalisation (RoutledgeCurzon, London, 2003); and我看中国1949年以来中国在西方的形象, translated by Zhang Yongxian 张勇先and Wu Di 吴迪 (Zhongguo Renmin University Press, Beijing, 2013). He has also attended numerous conferences on Asia, especially China, in Australia, China (including Hong Kong, Macau and Taiwan), the United States, the Netherlands, Canada, Switerland and the United Kingdom.