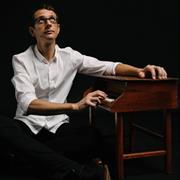 Are you Stephen Newcomb?

Steve Newcomb is an Australian pianist and composer equally in demand for his unique touch on the piano, detailed writing, and comprehensive style of arranging that explores the realm shared by jazz and new music. Steve maintains an active solo career and shares the stage with a multitude of artists, performing in various styles and making 'music in a knotty zone where Thelonious Monk meets classical music' (Sydney Morning Herald) and explore 'the paths less travelled of the piano ...' (John Clare). He has presented concerts around the world, performing everywhere from Carnegie Hall and the Sydney Opera House to Berlin's A-Train and the Wangaratta Jazz Festival. Steve has collaborated around Australia and America with leading jazz artists including Jim Pugh, Will Vinson, Kristin Berardi, Chris McNulty, Rafael Karlen, James Sherlock, Kavita Shah, Clocked Out Duo, among many others, and has performed as a sideman for Katie Noonan, and George Garzone. Steve receives commissions from a range of performers and organisations. He has written for a wide array of musical artists, from Ben Folds, Augie March, and The Panics in the pop world, to the Australian Chamber Orchestra, Sydney Symphony, and Adelaide Symphony Orchestras in the classical world. Steve takes special interest in combining the forces of classical chamber and orchestral instrumentation with traditional jazz trio and big band ensembles. Past commissions have included compositions for jazz philharmonic and Stefon Harris at the Manhattan School of Music; brass, choir, and big band at the Queensland Music Festival; and a toy piano concerto for the Perth International Arts Festival. He leads his own ensemble, the Steve Newcomb Orchestra, a large chamber jazz project realising original and diverse works for strings, winds, harp and voice with jazz trio, which can be heard on the debut album 'Caterpillar Chronicles' on the Listen/Hear! label. As an arranger, Steve has worked with countless artists and organisations and is sought after for his exploratory and 'lavish' style (Sydney Morning Herald). Steve frequently collaborates with Australian vocalist Katie Noonan as arranger and composer, including the ARIA award-winning album First Seed Ripening (2011), the acclaimed circus cabaret LOVE SONG CIRCUS (2012), Transmutant (2015) and With Love and Fury with the Brodsky Quartet (2016). His collaboration with vocalist Chris McNulty on the album ETERNAL (2015) earned critical acclaim including a 4.5 star Downbeat magazine review. He has arranged works for large ensembles including the Metropole Orkest, Jazzgroove Mothership Orchestra with Jeff Neve, and the Western Australia Symphony Orchestra. Most recently, he was musical director for the project 'Standing Waves', which combined the music of rock group Band of Frequencies with accompanying arrangements for big band. Based in Brisbane, Steve is Senior Lecturer, Head of Jazz at Queensland Conservatorium Griffith University. He has taught in clinics and workshops around the world and enjoys being active in community music programs, mentoring up-and-coming musicians. Steve completed both his Master of Music and Doctorate of Musical Arts degrees at the Manhattan School of Music as a student of Kenny Barron, Garry Dial, Dave Liebman, Phil Markowitz, Mike Abene, Manny Albam and Jim McNeely.