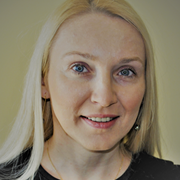 Dr Kairi Kõlves is a Principal Research Fellow and Course Convener at the Australian Institute for Suicide Research and Prevention (AISRAP) and Co-director of the WHO Collaborating Centre for Research and Training in Suicide Prevention, Griffith University. She has been working in suicide research and prevention since 1998. Between 1999 and 2008, she worked at the Estonian-Swedish Mental Health and Suicidology Institute and joined AISRAP in 2008. Dr Kõlves has been involved in several Australian, Estonian and international projects and has been an adviser to the World Health Organization. She is a member of a number of advisory committees including the Commonwealth Department of Health's Expert Panel on Suicide Prevention, the Queensland Advisory Group on Suicide, the Advisory Board of 'Lifeline Research Foundation' and others. Her work has been published in over 100 peer-reviewed papers, and numerous book chapters and reports.