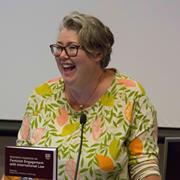 Are you Susan Harris Rimmer?

Associate Professor Susan Harris Rimmer (BA[Hons]/LLB[Hons] UQ, SJD ANU) is an Australian Research Council Future Fellow in the Griffith Law School. She is an Adjunct Reader at the Asia-Pacific College of Diplomacy at the Australian National University and a Research Associate at the Development Policy Centre in the Crawford School. She is a non-resident Research Associate at Chatham House in the UK. Her Future Fellow project is called 'Trading' Women's Rights in Transitions: Designing Diplomatic Interventions in Afghanistan and Myanmar. Susan is the author of Gender and Transitional Justice: The Women of Timor Leste (Routledge, 2010) and over 30 refereed academic works. Susan was chosen as the winner of the Audre Rapoport Prize for Scholarship on the Human Rights of Women for 2006. She often acts as a policy adviser to government and produces policy papers. Susan was selected as an expert for the official Australian delegation to the 58th session of the UN Commission on the Status of Women in New York in March 2014. She has provided policy advice on the UNSC, G20, IORA and MIKTA. She is part of the Think20 process for Australia's host year of the Group of 20 Leaders' Summit in Brisbane 2014, the Turkish Presidency in 2015 and the Chinese Presidency in 2016. She attended the St Petersburg Summit in 2013 and the Brisbane Summit in 2014. Sue was one of the two Australian representatives to the W20 in Turkey and China. Sue was awarded the Vincent Fairfax Ethics in Leadership Award in 2002, selected as participant in the 2020 Summit 2008 by then Prime Minister Rudd, and awarded the Future Summit Leadership Award, 2008, by the Australian Davos Connection (part of the World Economic Forum). In 2014 she was named one of the Westpac and Australian Financial Review's 100 Women of Influence in the Global category. She was named one of 100 global gender experts by Apolitical 2018, and one of 20 Queensland Voices Female Leaders in 2019. Sue was previously the Advocacy lead at the Australian Council for International Development (ACFID), She has also worked for the UN High Commissioner for Refugees, the National Council of Churches and the Parliamentary Library.