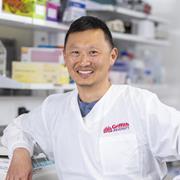 Are you Johnson Mak?

Professor Mak is a native of Hong Kong who undertook his undergraduate and post-graduate training at McGill University in Montreal, Canada. During his PhD Johnson worked with Professor Lawrence Kleiman at the McGill AIDS Centre studying packaging of primer tRNA into HIV. He subsequently moved to Melbourne, Australia to continue work on HIV assembly at the Burnet Institute. Johnson also held appointments with Monash University, Deakin University and CSIRO AAHL. Johnson is currently a Professor at the Institute for Glycomics, Griffith University, Gold Coast. He has a broad research portfolio in HIV having studied primer tRNAs in retroviruses, genomic RNA packaging and dimerization, cholesterol and lipids in HIV, viral-host interactions, imaging of HIV and analysis of recombination and mutation in HIV using next generation sequencing. His team pioneered the production of full-length recombinant HIV Gag for biochemical and biophysical analyses of HIV assembly. Recently Johnson and his team have described a pre-entry priming process for HIV, as well as revealed novel biology between HIV and glycans.