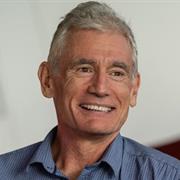 Are you David Hamilton?

David Hamilton is the Deputy Director and a Professor at the Australian Rivers Institute, Griffith University. He has held positions in Environmental Engineering at the University of Western Australia and Biological Sciences at the University of Waikato in New Zealand. He was appointed as the inaugural Bay of Plenty Regional Council Chair in Lake Restoration at the University of Waikato in 2002 and held this position for 15 years, until his current appointment. His research has involved testing and modelling of lake restoration actions and more generally, documenting the trajectory of recovery of freshwater ecosystems. He was editor of a book published by Springer (2018): The Lake Restoration Handbook: A New Zealand Perspective. In recent years he has been closely involved in management and policy implementation for freshwater ecosystems, holding appointments with the Ministry for the Environment (NZ) and advisory roles for regional councils and industry groups in New Zealand and Australia. He is editor-in-chief of the scientific journal Inland Waters and an Associate Editor of Hydrobiologia and Aquatic Ecology.