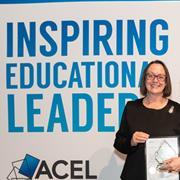 Are you Donna Pendergast?

Professor Donna Pendergast is Dean and Head of the School of Education and Professional Studies at Griffith University. Her research expertise is education transformation and efficacy, with a focus on: middle year’s education and student engagement; initial and professional teacher education; and school reform. Donna commenced her career as a school teacher working in secondary, P-10 and senior college settings before shifting to the role of academic at Queensland University of Technology, The University of Queensland, and since 2009, at Griffith University. Donna has served in roles associated with the profession at state and federal government levels. She is Chair of the Queensland Council of Deans of Education (QCDE), Chair of the Board of Directors of Queensland Education Leadership Institute (QELI), Director on the Board of the Australian Institute for Teaching and School Leadership (AITSL) and Chair of the AITSL Teacher Education Expert Standing Committee. Donna has more than 160 refereed publications along with 19 books including the highly regarded Teaching Middle Years: Rethinking curriculum, pedagogy and assessment, now in its third edition and the recipient of an International Choice Award as an Outstanding Academic Title; and 16 commissioned reports. Donna has conducted many competitive research projects related to school education together valued at more than AUS$4 million, including playing a pivotal role in preparing school leaders for the shift of Year 7 to secondary and the implementation of Junior Secondary in 2015. This reform was built around the Educational Change Model that was developed a decade earlier by a team led by Donna conducting research about effective teaching and learning in the middle years, around the nation. The successful shift of Year 7 is recognised as the most significant reform in education in Queensland in the last half century. Donna is now engaged in the shift of Year 7 in South Australia.